ToyboxDX Brog: Japanese Toy Blog » The Bullmark for Me- Moguera

The Bullmark for Me- Moguera

I’ve looked at vintage kaiju longingly for a while now, but I decided early on that I was going to be very particular about the vintage figures I’d pick up. I knew that my number one priority was a Bullmark classic, the 1957 Moguera, released way back in 1970. Collecting modern vinyls, they are very much made for adult collectors in a style reflective of the vinyl toys of old, but if I was going to pick up any real vintage figures, I wanted them to reflect that plaything aspect, and one of the biggest aspects representative of these being toys for children is writing on the foot. Many vintage figures have a kid’s name written on the bottom of the foot, so that those kids could keep track of their figures during the most chaotic of sandbox battles. I searched high and low for months for just the right Moguera: unbroken, in played with condition, and proudly emblazoned with something on the foot. I was expecting ‘the one’ to have a kid’s name on the foot, but a remarkably unique specimen popped up on YJA that I just had to have. Instead of a child’s name, this Moguera had the character’s name written on the foot. The marking is clearly vintage, and adds a unique bit of character to the toy. Who knows why ‘Moguera’ is written on its foot… perhaps the child owner couldn’t remember all the characters names?

When the figure finally came, it was pure bliss. I finally got to experience the ubiquitous Bullmark smell, and I could swear there was vintage sandbox sand stuff crusted into some of the deeper details of the figure. The actual figure is also fantastic. There are spots on the figure where you can still make out tool marks from where the original sculpt was only cleaned up ‘enough’. These were designed for kids, and, while handcrafted, were effectively pumped out the door. Everything about the figure has a utilitarian charm… effective but simple paint, chunky detail, and tons of dorky character.

This is my Moguera… here’s to forty more years of fun! 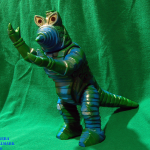 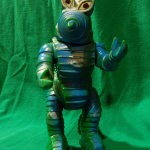 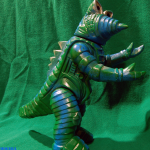 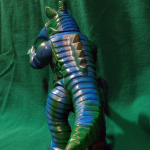 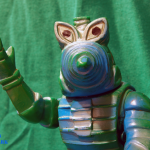 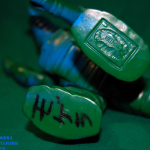 Comments Off on The Bullmark for Me- Moguera
Site Map