Comments Off on Face open…Des Fire!

How much is that Daiku in the window 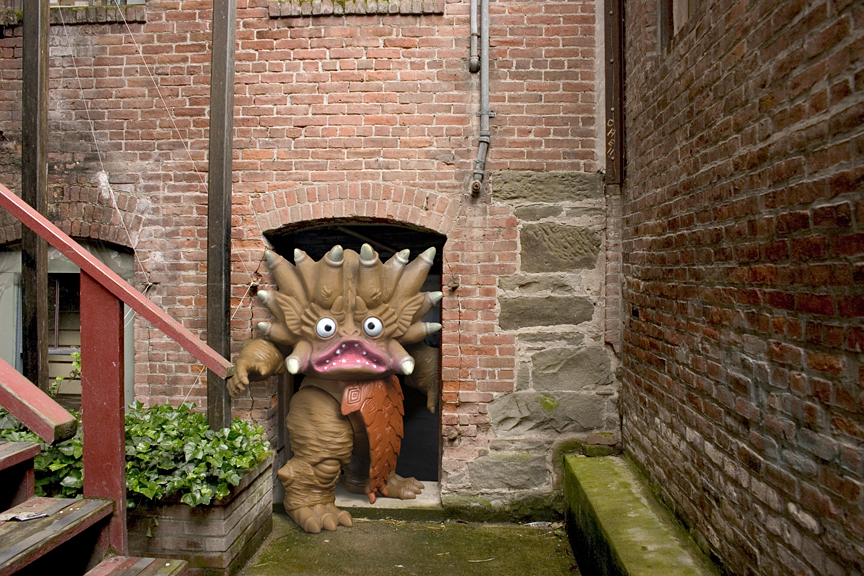 Comments Off on Miraclon 34th St. As usual, I have to start at the beginning…

Most of the heads I roll with sorta know me as the local go-to guy for Godzilla trivia. No, not for any impressive honors or accolades I’ve earned…hell, I’m hardly the foremost expert in tokusatsu (though I certainly like to think I know my shit!). I sure love that scaly bastard and I ain’t shy about it, but I like to think I’m down with ALL daikaiju–the myriad giant monsters that fascinated me every Saturday morning on Creature Double Feature.

But what made CDF an extra-special experience for me was that it was one of the few times during the week my father and I would regularly spend together. He was a bit of a hard scifi nut, so it wasn’t much of a stretch for him to get down with the old-timey American scifi and various tokusatsu featured on the program.

Anyway, there was one particular series of movies that absolutely blew my fucking mind at that tender age–a kaiju offering so unlike the often-campy Godzilla and Gamera flicks I was used to. It started with AIP’s English-dubbed Majin, The Monster of Terror…where I saw a GOD in the form of a giant stone statue come to life after several men drove a giant steel pike into its forehead. This enraged god’s subsequent rampage climaxed with him pulling the pike from his forehead…and impaling the evil warlord with it. Fuck me. I think I was five years old. This was NO Godzilla dancing a jig after beating up an ambulatory pile of shit.

Keep in mind that I was (and am now) an atheist: see, my parents taught me all about Hindu mythology, and while I enjoyed hearing these stories from my people and learning about our customs and traditions, there was no expectation placed on me to believe in these deities. And my family had just moved to the (very Catholic) suburbs of the Bean, so my only experience of “God” was through these people I didn’t really understand yet.

So here was this depiction of god being a vengeful, deathless force of nature and justice…not some amorphous, benevolent dude who made people feel guilty for doing shit. Mind=blown.

Fast forward to last April. Over the past few years, folks like Jim M and Mark K–amorphous benevolent dudes, in their own right–have been shepherding my inexorable slide towards collecting vintage vinyl. I had been no stranger to Daimajin toys, but now it was time to go big or go home. I finally got me an original 1966 Marusan Daimajin figure.

And it is glorious. The toy finally arrived a couple weeks ago…and with some rather curious timing, my old camera finally died last Friday. What you’re seeing are the very first shots from my brand new camera–and thankfully, the weather yesterday was quite agreeable…divine intervention, hmmm???

Anyway, the toy is stunning. I’m kinda glad I waited until I could fully appreciate the vintage aesthetic before picking this guy up. I know some people like more move-accurate sofubi…or just crazy-mint specimens of vintage pieces. This is neither. And I’m absolutely fine with that. Granted, when he arrived, he was kinda grimy. No, I don’t mean he was about to steal forty bucks outta my wallet and sneak out a window–I mean, he had been well-loved over the decades and had picked up his fair share of dirt. Oh, and curiously, his legs were reversed (I’ve seen this before on other vintage specimens–funny how so few people thought to correct the awkward stance). I just disassembled the figure and took my time with some warm, soapy water and a soft-bristle toothbrush. A labor of love, no doubt. The toy stands 9″ tall and is obviously made of blue vinyl with sparing silver and metallic green sprays. The paint rubs are numerous…but they don’t bother me in the slightest. It’s an old toy. It was played with by some child and appreciated enough to have been kept carefully in such nice shape for all these years. That weight of history is a big part of what makes vintage vinyl so special to me.

There are no cracks or other structural flaws with the vinyl. What’s interesting is that the sword hilt made of the same vinyl as the rest of the figure; on the hidden side is a simple plug that fits into a hole on the figure’s belt. The scabbard, however, is made of a very soft rubber. It’s simply glued on at the guard. I’m pretty sure that in the myriad reissues from M1 and Marusan, the whole sword is a single piece of vinyl. Not too much more to say about this toy, so I’ll just leave you with a few more shots… Hope you enjoyed the read and pics! Comments Off on I always feel like somebody’s watching me..

Had a little help from my friends 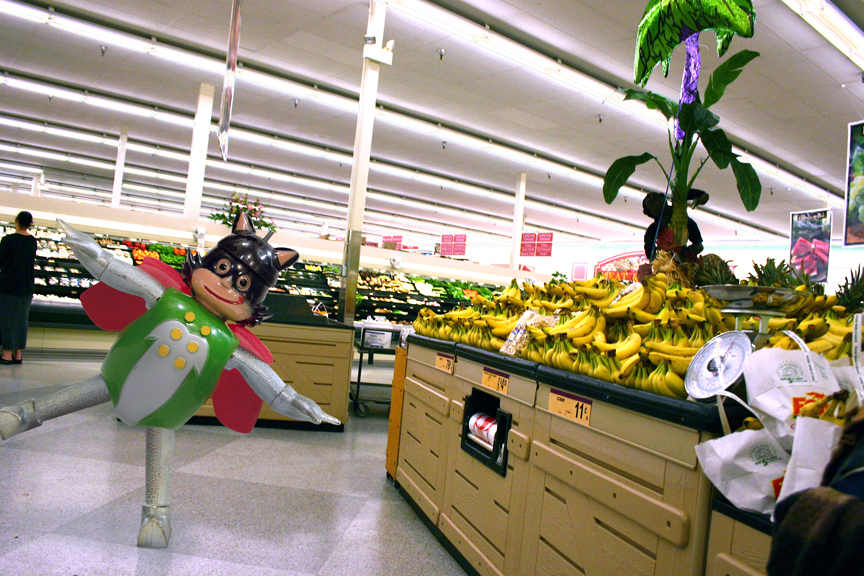 I thought he was just a kid goofing around. Just another bozo-button at large and awash in adolescence. You’ve seen ‘em; teens, sans supervision in the supermarket, making public fresh for their friends.

But this was different.

For one thing he was on his own. No giggling gaggle of onlookers applauded his tomfoolery. No, he worked alone – and, looking back on it, I do think it was work.

He tottered in goofily enough but made a beeline for the produce and, upon reaching that section of the market, tongue out (in concentration or anticipation I can’t say), leapt directly into the bananas and burrowed in.

My jaw must’ve darn near hit the floor when he did it, too. I don’t know who else saw him but the act was performed in such a perfect, fluid motion it had to’ve been practiced. Had to’ve been. You don’t just do that on a whim without hurting yourself, you know? Not that silently. It was stunning.

Anyway, I don’t know if he was foraging for food or looking for cover under there but he stayed under, muttering and rustling about, until the store officials showed up and asked, rather politely given the circumstances, just what he thought he was up to.

Oh, all hell broke loose then.

He burst from the banana bin and evaded the shouting scramble of store employees by leaping from display to display, havoc in his path. Peaches, mangoes, grapes, and cantaloupes were squitched, kicked and, in some cases, hucked. We onlookers ducked behind whatever we could find. I took to the floor behind the bulk-nut cart and thought I’d gotten away scott-free until I ran my fingers through my hair sometime afterwards and discovered a mass of orangey pulp there from some fruit or another. Even helpless, fuzzy little kiwis were not spared as the kooky intruder made his explosively circuitous and sticky escape.

One minute he’s mid-leap and pelting the cowering store manager with an endless fusillade of bing cherries, the next he’s a blur shooting out through the store’s advert-plastered, automatic doors.

That was the last we saw of him.