Mazinger Z has plenty of ENEMIES..

Comments Off on Mazinger Z has plenty of ENEMIES..

This was a big check mark off the list. The Daidenjin zenmai was like the Vision Control Tetsujin 28 or Daitetsujin 17, one of the very last Popy tins made in the early 80s, and as a result had a lower production run. The desire for tin was over, and a golden era came to an end. Children had evolved to toys with real technology. The naivete of the medium, though charming to us now through the filter of time and sentimentality, failed to capture the minds of those moving inevitably to brands that brought transformation, interaction and modularity to the mix. A turn key simply was no longer all that was needed to open the door to their imagination.

But Popy tins certainly went out with a bang, as the colors and overall attention to the graphic design are in my humble opinion, one of the finest in the entire series.

Well, the Boston Summit was a smashing success and we would like to thank everyone in attendance for their continued interest and support in this awesome yet crazy hobby.. A fun time was had by all, deals were made and new alliances formed. Oh yeah, we also made some kick ass exclusives..

That being said, we have just a few leftovers that we would like to offer to our brothers and sisters who could not close the deal on coming out. Let me introduce our SICK Gekiganger inspired Summit exclusive…

If that wasn’t enough, there are Tshirts as well!

Check the BBS for price and ordering info HERE! Once again, thank you everyone for your friendship, support and love of the Japanese toy funk.

So, for those of you that didn’t make it, I’M LOOKING AT YOU! Next year we expect to see your mugs amongst all the rest of us toy geeks and toy widows.

1975 ROCKED!!! Figured I’m due for a shitty cell phone brog so here goes. I just wanted to say that I think this is my all time favorite Popy Chogokin. File under “Declarations”! And BTW Fraser, I was short on acid free wrap and had to use a piece that had a crease in the middle. So, NO, it’s not the box… ;) 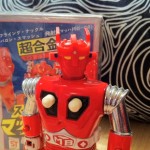 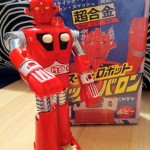 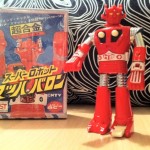 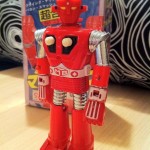 This was a rather epic purchase in the making.
Uncle Warren is the saintly keeper of all things Red Baron. There is something magical about the character for the man, that induces youthful abandon and causes all logic to go out the window. We have all been there.. that special design that just makes us silly.

So his self imposed focus on vinyl and avoidance of jumbos in general has allowed him to not have to consider this Red baron as an option.

A couple weeks ago, Warren and I spy what is basically a dead stock toy… And when I say “dead stock”, I mean this toy looks like it was in a time capsule. The box, struck me as being the stuff of legend… almost mint itself.

Warren makes his choice, that the love of character trumps the food group focus and asks me to help him bring the Baron home.

So, the long slippery slope of securing this beautiful toy ensues. After a week of nail biting and emails and shifting bank accounts, the final piece in his Baron pursuit is packed up and arrives.

Dave and I open the box, and I get his expert opinion. The smile tells me what I need to know. This toy is … perfect.

I will let the photos do the talking:

Even the ladies can’t resist the power of the Baron.

And finally the proud papa:

Also our greatest thanks to the efforts of Kohei from Tokyobuyers to communicate, secure and ship this in a textbook manner. You went above and beyond my friend.

In the competitive world of Japanese toy collecting, it is nice sometimes to simply help your friends achieve their grails, and bask in the glow of their love for the toy. In the end, I find this to be the biggest benefit of this community

Comments Off on Baron von Mint-hausen

Let’s start with the most important fact: I LOVE Patlabor. Anyone who knows me knows that I love military mecha that get dirty and shot up and battle damaged and dirty (again). What may come as a surprise is that, among all the real robot series, Patlabor might just be my favorite. The mecha are all much cleaner and better maintained than in something like VOTOMS, but every aspect of Patlabor just speaks to me, from the characters and the writing to the underlying concept of slick police robots beating up other, bad robots.

As with all good robot shows, Bandai has made many, many toys and model kits over the years. What I did not realize until recently was that, alongside the venerable 1/60 scale plamo kits from the 90’s, Bandai made three soft vinyl kits of machines that had limited screen time. As it turns out, these kits are awesome. They fall together, and the result is a posable vinyl figure not unlike the axillary labor sofubis that CMs Corps released alongside their Brave Gokin line. As such, these figures make an excellent addition to the CMs Patlabor lineup.

I have been on something of a vinyl kick for not quite two years now, started in fact by the CMs labor vinyls, then branching out into modern, designer, and vintage kaiju and all sorts of zaniness. I love everything about vinyl, from collecting to painting myself, and have learned all sorts of new things painting kaiju, including airbrushing and using the excellent Monster Kolor paint system developed by Dead Pre$idents. Painting kaiju is fun, but I’ve been itching to start bringing these new tricks back over to ‘real models’.

As it turns out, a vinyl kit of a police mecha is an excellent middle ground to start that transition. I wanted to give the Python a nice metallic automotive finish with gloss white details, not unlike a real motor vehicle. A few airbrushing sections and some masking work later, I think I nailed it. Now, I’m not one to leave a model kit clean looking if I can help it, so I figured I had better muss this mecha up as if it were finishing up a labor crime scuffle, instead of just arriving on the scene.

It almost seemed sacrilegious to mess up that beautiful finish, but the end result is much more complex and full of depth for it. There’s a couple nasty paint dings that are going to earn Gomioka a chewing out and a little dirt and dust, probably from being pushed into a building by the badguy.

More importantly, I thought I had finally added a machine to my Patlabor collection that drifand, Patlabor collector extraordinaire, did not own, but when I looked back through his pics on the forum I realized there was a different Python figure lurking in the background of his display. I have the Saturn labor kit on the way, so I may yet get one ahead of him.

To me, this kit came out as the perfect blend of modern techniques and a slightly less-than-modern rendition of an awesome mecha. Now I just need to get it home and introduce it to the rest of my Patlabor collection. To finish it off, I’ll have to make the riot shield and baton it wields in its animation appearance. A second kit to make Yuuki’s machine is already in the mail.

This is one of the latter.

I drive with the girl for 4 hours today to pick up a tin I secured a couple weeks back over the phone.

It feels fitting that this was not an online purchase. It was personal, analog, and reminded me of the days now long gone, when human conversation and not a keyboard was the catalyst for the hunt.

Ogon Bat, one of the very first Japanese super heroes, was created in 1930 by writer Ichiro Suzuki. However Ogon’s origins go back even further in the realm/art of Kamishibai.
After falling into relative obscurity for a generation or two, Ogon was recreated in 1966 with the arrival of a live action movie staring a young Sonny Chiba. Its success spawned a number of toys, many of which were tins by the epic manufacturer Normura.

The characters beginnings only succeeded to heighten the love I had for the mythological “presence” the design already had over me. The simplicity of the colors, the raw graphic elements of the box, the naivete the toy expressed. This is what the term “old skool” was created for. The toy is 45 years old and counting. It is for me, kindred , and a continuation of any Yoshitoshi print, chawan, or nihonto. Iconic, simple and balanced.

This is why I am still collecting.

This is HOT! From the biggest Massholes in Mass., Brownnoize Productions (aka TBDXr Sanjeev Selvaraj and Co.) comes the first figure in their “Faux-Gokin” line. Probably the BEST Grendizer enemy of all time, GIN GIN!!! These are a limited run called “Yojimbo” and are bare antiqued solid metal with magnemo limbs.. That’s right MAGNEMO limbs. For more info you can hit them up HERE. Stay tuned for my in-depth review coming soon!

In the meantime, feast your eyes on this bad ass shot:

Comments Off on “Yojimbo” Gin Gin!
Next Page » Site Map