Comments Off on Nomura Diecast Analyzer

Comments Off on RUN!

Hey guys! Well, I know many of you will be packing your bags and putting on your money belts in search of those grail pieces soon. Well, going to do the Tokyo toy shopping trip is no joke. There are some sweet deals, and some sweet pieces to be had. So, you’ve gone through the city and spent days at Nakano Broadway and have some time to kill before taking that flight home..

Well, have I got a surprise for you! Read all about it HERE. That’s right. Kaikodo… Owned by our old friend and hardcore toy collector/creator Yutaka Ishida, who’s been our friend for many years.

Overall, his shop is beyond words, and is honestly something you have to see to believe. That’s why I’m filling you in, as I would hate to see someone go all that way and find that his “warehouse” of a shop has moved..

You can find all the necessary info and new pics posted HERE.

If you stop by, please make sure to come back here and leave a note on the BBS. I for one can’t wait until next year to see the new changes, AND as an added perk it’s right next to the train station! Even better. Have fun!

Comments Off on Kaikodo: WE’VE MOVED!!

The Case(s) of Renewed Interest

While everyone else was out ransacking Ikea for Detolfs and other display solutions with mildly retarded sounding names, I was hitting up the Goodwill for all manor of small and ungainly wooden shelves. My display solutions, like my collection itself, grew organically and manically. I loved the insanity of it and disdained the sanitized, high-snoot, clean-room precision of the hobby’s ideal. Sure, that looks great: just like everybody else’s. Not. For. Me. (see a craptastic, unnecessarily noisy video of that room)

Despite this attitude, I did suffer from big glass case envy. Though I’d already dropped a respectable sum for an old, 6′+ tall, rotating, glass display case for my chogokin, in the back of my mind I still dreamed of furthering the insanity. When these two shelves fell into my lap I didn’t blink, I bit.

One, 72″x24″x42″, was a shoddy, old behemoth of wood and glass that was being replaced at work. The owner allowed I could have it if I could haul it off. Luckily, I own a truck.

the long case arrives home and is tested for use …

The other – not quite as nice: pine and glass with a white interior and a faux, wood-grain exterior, 48″x24″x40″ – I found about 6 months later. It was sitting outside a store with a “FREE” sign taped to it. They just wanted someone, anyone, to haul it off. Did I mention I own a truck?

Thrilled as I was, neither had any shelving and, of the six sliding doors that once sheltered their proposed wares from dust and the groping hands of the ill-bred, only three remained. Further, I had no space for them in my room.

I took both home and promptly squirreled them away in the garage. I justified the collecting of them by looking to the future – besides, the glass in them alone had to be worth … well, more than free, anyway. Right?

In my mind, I could see the day they would have shelves, doors, and lights. I took hopeful measurments and located various sources for these things should that day ever come -but, really, it all seemed so far off.

And so it was. The cases sat in the dark of our garage for a good three years or so.

When we finally moved to a new house, I found myself with an unfinished basement room large enough to accommodate my cases if barely myself (the ceiling was a bare-joisted 6′ 4″ – no jumping jacks, please). I dragged them in and poured my vinyls into the long one (the other was used for more utilitarian storage purposes).

But the room was dark and musty, featuring no windows to clean, free crystalline growths, and a plethora of arachnid roommates. In short, it was more like a dungeon than a den: much like my married life.

Eventually, I pried myself out of the snaggle-toothed maw of marital despair I was in and got a place of my own. By this time I was no longer collecting or even thinking much about toys – but I was still dragging that which I had collected behind me.

As I settled into my new reality and struggled to make ends meet, I vacillated between selling every toy I had, simply keeping them packed away, like a memory of a love lost, or displaying them. It had been two years since the bulk of my collection had seen the light of day, longer since I’d counted myself as a toy collector; a life that seemed someone else’s.

Though I did sell a few things when necessity demanded it, the latter concept won out and, after a few months, I converted my attached garage into a pseudo toy museum and library. Though my cases still lacked shelves, lights, and the proper number of doors, they were finally serving the purpose for which they were intended (well, by me, anyway). Looking the room over, I felt I’d made the right and, importantly, an easily revokable choice.

Because of its location in my garage, I do not often interact with my collection. Unless I am walking through to clean the cat’s litter box or fetching a new read, it remains sight out of mind. That being said, it is not all that rare for me to stop as I walk through and gaze upon some aspect of it, remembering a time when I awaited the postman’s return with eager anticipation.

A recent trip with Hillsy to see Jim Maitland’s amazing collection of vintage toys reignited the lust in me. Though I talked all weekend about no longer being a collector, the old fever began to grow anew. My lot has improved some and, after a prosperous August, I thought “what the hell” and dug out my old notes on the dimensions of the proposed shelving and dealers of retail supply.

Around $100 later and some sweaty arranging sessions, I’ve got three display cases I am proud to call my own: funky, chunky, and fun. Instead of being spread out along the bottom of the cases with at least two foot of dead air above them (not to mention seriously crowded case-tops), my sofubi now reside on three levels in my long case and two in my short. The biggest shock was how it made my vinyl collection look as if it had swelled by a third: Wow, I have a lot of crazy shit!

shelving to the left of me …

… and shelving to the right of me

Sure, I still need doors, I still need lights, and I’m seriously contemplating adding mirrored interiors to both of them, but dammit, it looks, if I do say so myself, fucking awesome.

I wish you were here to see it.

Comments Off on The Case(s) of Renewed Interest

Comments Off on Grendizer x 24

Can you feel the love? You NEED a Voltron/Golion USB to keep your lil’ Nekosaur happy.

Comments Off on Brotherly LOVE!! 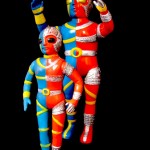 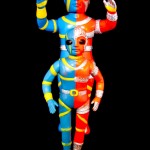 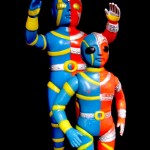