Comments Off on Takara: Mirrorman

Comments Off on Takara: Rubber Gojira

[Dougram] Feddies in the sand

Comments Off on [Dougram] Feddies in the sand

Self Portrait in Studio

You may have already figured this out but I’ve spent a good (embarrassing?) chunk of the last decade collecting, photographing, and obsessing over (primarily Japanese) toys.

In the interim, I have taught myself a lot about studio photography, photoshop composites, and credit card debt.

One of the main effects this odd combination of craft and immature materialism had was the drawing of my incipient visual creativity out of its cave and into the light: due to my success with the tools and skills, I went from being overqualified as a retail schmuck to entering the fields of graphic and web design. Had I not felt the urge to share my toy-obsession online with similarly obsessed friends, I might still be toiling unhappily behind some store’s counter.

The flip-side, however, is that I somehow felt that what I was creating – images of other people’s plastic and zinc designs composited with scenes I chose to place them in – was viable beyond the simple titillation of my chosen group of online hombres.

Fueling this misconception, in the mid-2000’s and thanks to a friend, I reached a verbal (if you can call email “verbal”) agreement with a publishing company to produce a book of my composite shots, a deal that petered out a few months later when the company realized that marketing the images would be difficult.

Despite this reality check, I continued to make the images, not only for fun but also convinced by people’s professed enjoyment that I had a shot at marketing them. As a test, I began selling shirts and calendars of my toy pictures via Cafepress and gained a small following of people who continue to pick up my offerings with relative, annual regularity.

Though my situation eventually changed so that I could no longer afford to buy toys, I continued to make composites, using them as a bridge to my still-collecting, online friends … and my illusion of the images’ value outside this fan-boy circle grew.

Earlier this year, I felt ready to set out once again to produce the book. Before beginning, I solicited opinions from a few trusted parties and, with my new skills, decided to layout the book myself, thus creating a more professional vehicle (if not an actual end product) for the collection.

During this process, there was a war going on within me between the rational and the hopeful. On the one hand, I really felt that my work was not only fun but valid, marketable. On the other, I knew that what I was engaged in was really a gigantic cheat. The central focus of my images weren’t mine. Sure, I’d applied lots of hard-won skills, labor, and money into the project but that didn’t change the fact that the main designs had been stolen from others. Imagine a book of Disney-related toys in similar shots being produced and sold without Disney’s permission and outside their original story lines. Yeah, no problem there … *cough*

When I felt I had something to show, I asked the same friend who’d hooked me up with my original publishing deal, now wiser and a published author himself, to take a look at the rough draft of the book for me. He kindly did so and then hit me with the facts: this was good, fun, fan work but otherwise pretty unrealistic, as it constituted copyright infringement.

His tactfully presented but clear comments hit home, shattering the remnants of my illusion. I mothballed the project and entered one of the deepest funks I have known in years. I felt, after a life of half-assed creative endeavors, of endless, idiot pipe-dreams, that the one thing I’d finally managed to take all of the way, the one thing I’d finally created that held any real value … didn’t.

Rather than shouldering the burden of this knowledge, as I have now, and using my considerable creative momentum to blaze ahead into one of a dozen other potential projects I have lined up, I crumbled. I tried to put a brave face on it but, inside, I was a mess and ended up making an ass of myself on the forum of the website where the seeds of the project first took root; an act of public self-immolation I still shudder to think of. Awesome.

As with all superficial wounds, I eventually healed, grew up a touch, and moved on. Sort of.

I still sometimes have the urge to make toy composites and, yet, know that my motivation for wanting to do so is wrong-headed and that I’ll never be satisfied doing so again. I ache for the sense of accomplishment that producing something publishable will give me and, to that end, the toy shots amount to nothing more than a distraction and a dead end.

So I am saying goodbye to making my toy composites, at least for now. This year’s calendar will be the last. Ending with the image above, a self-portrait I produced for the ill-conceived book, is a bittersweet irony for me … but really, its just a silly composite, of a silly man, being silly with his silly toys.

Comments Off on Self Portrait in Studio 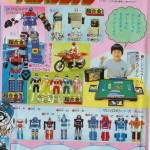 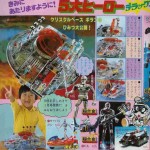 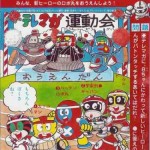 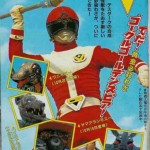 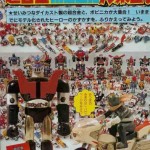 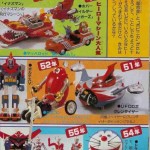 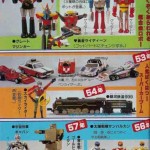 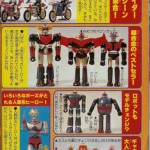 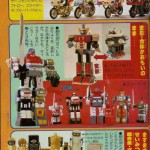 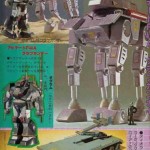 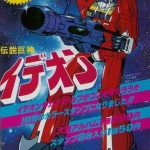 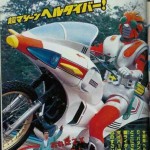 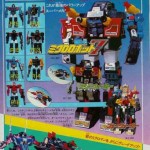 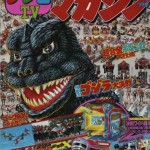 I LOVE me some children’s books!!

In the interest of research and all, I guess it might just be appropriate. I’ve slowly but surely amassed some very quintessential historic toy related info, yet… Some of it has been absolutely ruined…. BY CHILDHOOD IDOCY!!!

I know, I know… Who busts a wad of Pocky brilliance on a Gatchaman 11 cardboard book?? Well, let me tell you. A 5 year old kid. Doh!!

All good. I really “loved” these pages.

Can you even imagine what I’ve done to these other books over the years? And this is only the tip of the iceberg.. Mmmm Mmmm Mmmmm…..

Comments Off on I LOVE me some children’s books!!

Comments Off on Great Robot Base

I think the caption says it all. I couldn’t ask for better inflatable friends.. ;)

Comments Off on Blow me…