Written ostensibly for a young male audience, Yuusha Ou (King of Braves) Gaogaigar featured loads of old-school Super Robot daring-do set within a formulaic plot outline, where the men were macho for the most part, females eyebrow-raisingly risque at times, and the baddies, Deliciously Evil. And through it all, over-the-top robot fighting action, with piston-pumping gattai-sequences, innovative CGI effects; and time and again, hot-blooded heroic sacrifices with enough angst to rival Evangelion at times. Kids and grown-ups lapped it all up… To them, the GGG team of humans and semi-sentient AI-driven robots truly embodied all that was Heroic, Good and Brave about humankind.

It’s no wonder then, that toys and garage kits of GGG characters enjoy a great popularity amongst fans. For the longest time, the best GGG toys were those made by Takara. Big and colorfully molded in tough durable plastics, they bore clunky proportions (by today’s standards), eschewing better articulation for kid-pleasing combiner action that closely matched what was shown on TV. Fearsome Gaogaigar lost quite a bit of its presence in the translation, but nevertheless, the various original Japanese toys or Korean-licensed editions alike were eagerly sort after by collectors.

In more recent years, fans have been blessed with more choices from Yujin, Kaiyodo and Kotobukiya. These companies first offered beautifully proportioned and articulated PVC figurines of the various hero robots – then followed up with tougher ABS and ABS/diecast editions for Gaogaigar (and variants). So fans could finally own a beautiful rendition of their strong>King of the Braves… except that none of them could transform. That, was a deal killer for fans like myself, who really enjoyed the excitement of seeing the gattai sequence before the ultimate robot showdown. When Studio Halfeye showed-off a gorgeously sculpted full-gattai prototype, fans salivated once more, only to have the carpet yanked out from under them when the outrageously high (estimated) price was revealed. Could no one make the right compromise of aesthetics versus playability and affordability to make GGG fans’ dreams come true?

Well, it seems that CM’s Corporation has come to the rescue! Who are they? I don’t know much beyond that they’ve released a few sets of very well-received Macross mecha figurines (among others). I really didn’t know if they could successfully make the leap from PVC miniatures, no matter how nice, to full-fledged diecast/ABS construction. Still, their prototype photos promised GGG Heaven (I tried not to think of the corresponding Hell should it prove to be an ignoble failure), and so I placed an order for their Brave Gokin 01 set back in July ’04. I was not disappointed when I finally laid hands on the massive 17″ x 6.5″ x 6.5″ box last Sunday. Nothing to shout about on the outside, but the double-stacked styrofoam trays inside brought about instant Soul Of Chogokin deja-vu. They even threw in an SOC-styled accessories stand!

On to the toy proper… First up is Galeon, the white cybernetic lion that becomes the robot Gaigar – the core of Gaogaigar. I was pleased to note the generous use of diecast in the thighs and torso. The quality of plastics and the finishing were also of a high standard. The joints have been much-improved over the old Takara DX, although to say poseability is “superb” would be stretching it. I’m just glad Gaigar doesn’t look like a steroid-pumped freak anymore! On closer inspection, CM’s Corp’s attention to detail comes to light – especially around sharp, pointy areas like fangs and the like, which Takara had to make child-safe before. In Lion-mode, the new Galeon is a sleeker, less muscular cat. Other things to note: 2 PVC tails are included for Galeon, a short version which folds up neatly inside its waist/skirt armor, and a slightly longer one for tail-swishing poses. Also worth noting: the use of PVC for Gaigar’s head is slightly disappointing, but no different, really, compared to a majority of Bandai’s SOC toys. It’s just that the white material is quite obviously different from the rest of the body. Consolation? It’s gonna spend most of the time hidden under GGG’s nicer head/mask anyway.

Next up is the B2-bomber lookalike, Stealth Gao. From the top, they look mostly the same, but flip them over and, Aha! What’s this? The new plane has sneaked in a streamlined panel to hide the unsightly hollowed-out innards of old. The panel is “optional” – it has to be removed for the Final Fusion combination – otherwise you can’t attach Gaogaigar’s head to the red post. With the head attached, alas, the panel won’t fit in anymore. Small quibble anyway when you spot the cool new additions, like the swiveling wing-edge nozzles and proper jet-intake covers over bare-fists of yore. (Note also the diecast armatures which clasp the sides of Gaogaigar in Final Fusion mode.)

Making yet another point for details are the pair of Drill Gao machines that obviously form the main robot’s feet. Check out those pointy, chromed rotatable drills; and how about real rolling rubber tracks? Mmm Good!

In the earlier episodes, Gaigar used to “fuse” with Drill Gao and Stealth Gao to form a good-but-not-great intermediate form. The new Gaigar can rotate its shoulder-intakes 90-degrees to form pegs which attach to slots on the Stealth Gao. Honestly, I can’t remember if the old DX could “wear” its Stealth Gao like that, BUT the older toy had a much more secure means of attaching the drills to Gaigar’s hands, by way of a flip-out latch on the drill. The new toy relies on 2 small spring-loaded studs inside the “foot wells”, which clip onto indentations on Gaigar’s forearms. For my toy, the right arm attached nicely, but the left side tended to slip off. A small plus: the clip used to attach the two drills together can be recessed for a cleaner silhouette.

Then, we have the Liner Gao – another singularly purpose-made vehicle, existing solely for that moment when Gaigar calls for Final Fusion. The older version is very simply constructed – no add-ons. Just insert into Gaigar’s chest cavity and click the halves into a “V” to lock in place; the upper arms are then lowered to align with Stealth Gao’s jets/forearms. The newer version again offers a cosmetic part: the middle portion has to be removed to expose the V-hinge. Not a bad idea, but just more kibble to keep track of! More importantly, as Gaogaigar’s arms, the shoulder joints feature 6-degrees of freedom for great articulation. Plus, the upper arms also turn in the vertical axis. Excellent improvements!

We come at last to FINAL FUSION. Permission has been granted; the GGG seal stamped; the safety glass smashed to smithereens by Mikoto on the bridge. How does CM’s Corp’s Brave Gokin stack up against the previous King of GGG toys? The answer is “Very well indeed!” The Takara may tower over the newcomer at 12″ versus 9.5″ at the wing-tips, but there’s no denying which toy has the better overall looks. True, there are other GGG “toys” out there with even better sculpts, and even higher quality of finish and diecast content, but THIS toy does the best job of balancing looks, gimmicks and playability. The provided accessories give a fan ALMOST everything one could wish for to recreate those famous poses in the show. “Almost” because while we do get a very nicely chromed and detailed Dividing Driver, we are deprived of the company of the all-mighty Goldion Hammer. (But you knew that already if you’d been following the prototype pix.)

The Dividing Driver attaches a little iffy-ly to the left arm by a single peg in the slot where the first would go. The old DX had the benefit of a latch-lock, but its useless legs could never achieve anything close to a cool pose, like the CM’s can. Sure to be a hit with
fans is the Protect Shade force-field, complete with a commanding “STOP RIGHT THERE!” palm. Equally intriguing is the “spinning-in-motion” Broken Magnum rocket-fist (which can actually be shot off from a spring loaded arm attachment, but would you?), which comes with a rocket exhaust cloud, AND a supporting stand for the lengthy set-up. I opted for a simpler solution: Just turn the upper arm 90-degrees so that it doesn’t swivel up/down and you can get some really solid poses; but don’t blame me if yours breaks off after prolonged display! Despite the lack of Goldion Hammer, Gaogaigar CAN pull off its more dangerous finishing move, the soul-draining HELL AND HEAVEN by way of a clasped-fist attachment. You can even choose to show the retrieved Zondar Core, if you want to…

What more can I say? Is it everything a GGG fan has hoped for? Perhaps…
It is certainly my dream representation of the King of Braves. It incorporates SOC, or near-SOC levels of detailing, quality of material and finish into a pretty reasonable collector’s price (approx US$150+). Arguable minuses include the need to remove cosmetic parts, and the rather immobile waist section. Even with a 5-part hinged skirt armor, the contraption only serves
to obstruct more dynamic leg poses. Don’t blame CM’s Corp for that; blame Ohkawara’s original design. I think it’s safe to say we’ll be seeing some obvious repaints and variants soon, like the addition of space boosters to make Space Gao, and even an all golden or green-chrome version. What I do hope is that Goldymarg gets it’s own Brave Gokin release (No. 2? Please?), so that these two titans can face off more fairly on my desktop. :-) 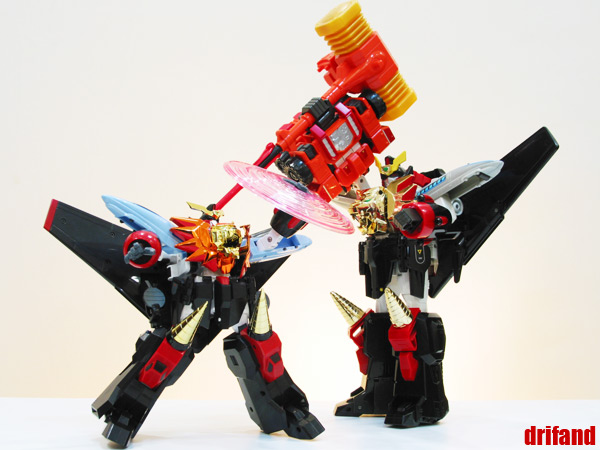 —drifand
Comments Off on At LonGGG Last!!!
Site Map