I worked on this BROG for some time, but always something else
prevented me from finishing it…like Kemler. But no excuses anymore,
here you are!

The story begun in germany nearly 40 years ago.
A country that is not only famous for great cars, tasty beer and
tactical submarines. NO. Also famous for the fact that you could
find vintage Zenmais in the forrest. Why do you think is a famous
forrest near Freiburg im Breisgau (south of germany) called
“Der schwarze Blechfiguren Wald”. Translated that means something
like “The black tin figures forrest”…

OK. Bullshit. This is not a good start for the BROG.
Have to add more action and realism in the story.

OK. No “Missing in Action” or Rambo-esque story.

The truth now! I bought this 2 wonderful Zenmais on Y!JP a few months ago.
Nobody was really interested in these guys, so I got them without any epic
“bid-battles”. No wonder. The condition of this Ultraman & Ultra Seven Zenmai
wasn’t the best. I guess a solid C-0,4. But I immediately recognized the immense
“potential” of these rusted beauties.

What “potential”? At least potential as photomodels.

A few weeks later a pretty beat-up Ultraman Leo showed up on Y!JP,
but a few other “rust lover” also showed interest and the price went up.
So, no Leo for me.

Enough bla bla. Here are the two guy.
From the underwood to the glas display, rusted in dignity!

Finally they escaped the evil humid jungle. Nearly rusted away.
Now a dry & nice place waits for them. Hopefully for the next 30 years. 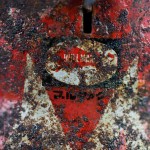 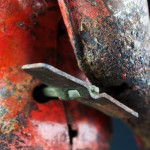 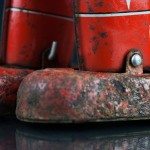 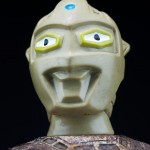 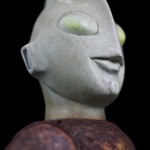 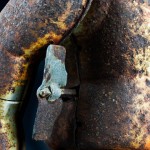 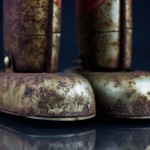 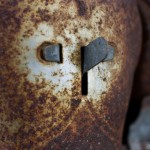 No I only could hope that these 2 Survivors will be
accepted by the others.

That’s it! As usual more photos etc in the BBS.