Growing up in El Salvador in the 1970’s my wife Esmeralda’s favorite television show was without question “Mazinger Zeta”. Yep, just like every other kid in the world it seems, with the exception of North America, Go Nagai’s Mazinger Z was a favorite among boys and girls alike.

My wife’s memory is uncanny, and we often discuss her vivid memories of Koji, Sayaka and Mazinger. She used to play a Mazinger Z inspired “pat-a-cake” style game with her girlfriends, and incredibly she can almost recite it perfectly some 25+ years later. I said “almost”.. In a recent Google search (in espaÃ±ol) to unearth the correct order of the rhyme, she came across an article about a 10 meter (32 feet) tall Mazinger statue in Tarragona, Spain. 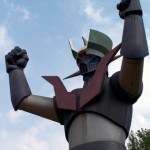 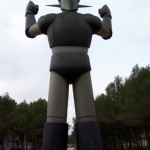 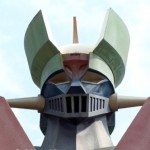 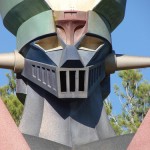 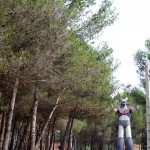 Per her translation, the statue is located in a forrest called Pinus Pina. It was built in 1976 while the series was wildly popular on Spanish television. The statue was built to be the guardian of a housing development to be called “Residencial Mazinger” but never came to fruition, leaving the Mazinger Z statue alone to protect only the forrest. Check out this AMAZING footage from 1976 documented here:

Apparently the statue was built to encourage children to beg their parents to buy a second home in the new countryside development “Urbanizacion Mas De Plata”. Made of fiberglass the statue stands 8 meters tall and tops out at 10 meters up to the top of his arms.

It’s a small world after all..