I finally completed a little project that has taken way too long. I got a set of resin wings and Counter Crosses for my play-worn GA-51 from Jason a while back. They fit and worked perfectly, but there were a couple air bubbles. I always told myself I’d refinish the parts, and then my Gaiking would be bumped up a notch.

Once I got to sanding and polishing smooth, I thought how cool it would be to use Monster Kolor to add a glossy pearl finish, similar to the metallic flake finish of the blue parts. Now, the weapons are the nicest looking part of my Gaiking. The shorn-off horn and chest chipping works for me somehow… Gaiking is so inherently badass that he doesn’t look like a dinged up old toy so much as he looks like a beatstick robot after taking a licking, but still in the game.

I don’t have the attachment to or childhood memories of Gaiking that a lot of the forum members do, but I can recognize a damn cool toy when I see one.

Comments Off on Gaiking Ready for Battle

Comments Off on Ultra Mommy..

Between the Rody and the smallest Kewpie in the collection.

Comments Off on Gearwalk Empire

Comments Off on Super 7 Firerobo!!

Found this while cleaning out my phone the other day, forgot it was there…. I don’t think mere words can possibly convey the sheer level of awesome going on here

BEHOLD…… Fujiko Fujio built this random thing for you…..

Though not nearly as epic as some of the posts that precede this one, I wanted to let you in on a humble discovery I made yesterday, which might “spark” your interest.

A short while back I won an auction for a Kamen Rider sparkler, with a box, that had thought was a variation of the current one I had, and written about here.
http://toyboxdx.dsri.xyz/brog/?p=8498

Excited, but cautious, as the price seemed higher than typical for a sparkler this size, I followed through and won the toy for more than what I would normally pay . I chocked it up to the box variation and called it a day.The box itself is beautiful and a wonderful rendition by Shotaro Ishinomori. I am a sucker for any Ishinomori- san illustration, so this seemed like a no brainer.

Fast forward three weeks. Box arrives from Tokyobuyers. Most of it is the girl’s, but I see packed in the corner an individually packed box, looking slightly larger then I expected.

To my utter happiness, yes the box is different but also twice the size! I put two and two together and realize unknown to my limited knowledge, much like other sparkers, the Yonezawa Kamen comes in two sizes, the ST and DX. The paint scheme is slightly different and the arms are movable. It sits perfectly between the mini and the larger flying sparkler, completing a trinity I had no idea existed.

Now there are going to be those of you reading this who knew of it’s existence and will look at my pedestrian rambling as quaint and uneducated. Fine with me. I am just psyched that I unknowingly got more than I bargained for, It rarely happens to me anymore, so I thought I would share.

Comments Off on Unknown pleasures… 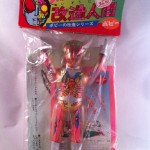 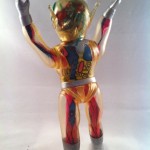 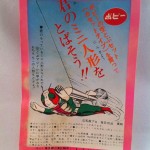 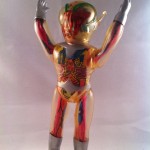 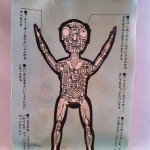 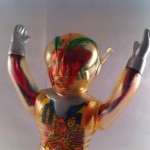 Comments Off on Fireman – ãƒ•ã‚¡ã‚¤ãƒ¤ãƒ¼ãƒžãƒ³

Every now and then, ya gotta break out the big guns…

For Bullmark collector, there was a bit of a ruckus about a month ago. In rapid succession, a number of highly sought-after Toho vinyls popped up. Far and away, the more celebrated of these was the legendary green Godzilla that Brian Flynn scooped up!

Also causing a stir around the same time, a mysterious Mechagodzilla appeared that Mike Johnson told me was an especially rare vinyl variant. IIRC, that went for around 500k…far too rich for my blood at the moment…

Ah, but with all eyes and anxious keyboards watching what would happen with these two titans, the humble Megalon appeared (“humble”, my ass!). And no one seemed to notice! It was listed originally for 200k, which arguably isn’t a bad deal at all…even with today’s exchange rate. No action. The auction recycled. No action again; it recycles again. In the middle of its third week, I had Tokyobuyers contact the seller and offer 150k. No response, but upon the third recycling, the seller dropped the starting bid to 150k and added a BIN of 200k. Still no action…and the very morning of Brian’s green Goji, I swooped in and scored it…30 minutes before Brian’s fabled purchase!

Broke as hell, but happy, I received Megs and a bunch of other Bullmarks last week. Walker, Nekrodave, and I took a nice little group shot at the shop Wednesday night: 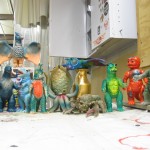 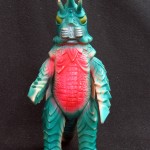 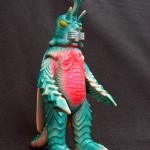 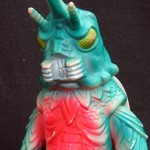 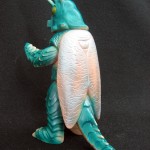 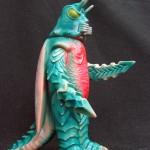 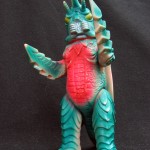 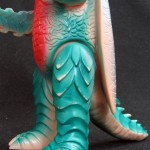 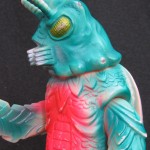