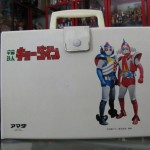 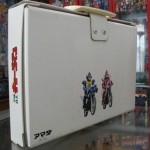 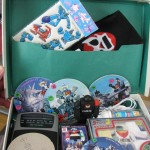 It’s all about the Pride…

Unfortunately, it’s not all that often that I get blown away by a new toy. Especially Japanese vinyl these days.

But right now, I’m blown away.

When Marusan first announced its M-Pop Rainbow Series, it definitely seemed like an interesting experiment to me. I mean, they’ve been pushing the barriers of licensed (character) kaiju vinyl for some time now with lines like the iridescent foil-filled “Crystal Kaiju” series and other cool, creative shit like that. The M-Pop Rainbow sets seemed like a nice way to return to a certain simplicity. No clear vinyl. No glitter. No glow. No crazy inserts. Just seven unpainted figures of some of their most venerable Toho and Tsuburaya sculpts…cast in opaque ROYGBIV (rainbow) colors.

Neat…but I never thought I’d actually get a set for myself. I mean, I respect Marusan and I kept up with news of the series, but it just didn’t seem my thing. I kinda figured the series wouldn’t last seeing as how the vinyl market’s in retreat. And what “hardcore” Japanese vinyl collector’s gonna plunk down $200 for something as un-kewl as licensed kaiju toys when there are so many “hot” designer toys out now (bitter, table for one?)???

But, yo, honestly each release tempted me. The original Marusan Goji sculpt was tough enough to pass up. Hard to get more iconic than that. Then they go and drop a gorgeous Mothra set…that’s basically perfect in rainbow colors. The Ultraman ones were intense. Hedorah almost broke me. And, yes, believe it or not, fucking Guilala–one of my favorite all-time underdog kaiju–had me on the fence!

Oh. But then Marusan done did it. They brought the mechanized noise. Set #8: Mechagodzilla. Now, how in the hell was I supposed to resist this?? Nah, it was on now. I previously didn’t have any figures of this sculpt, and at 2313 yen per figure (plus shipping, of course), I’d be pretty fucking stupid NOT to throw down.

And am I pleased with my purchase? Oh hell yeah.

For real, these things are killer. So much fun. They look amazing…in pretty much any display. As long as you can fit ’em all on your shelf, of course.

Honestly, the part I like about them the best is how much they take me back to my childhood, playing with erasers. Yup. Roger definitely blew up the spot with his tongue-in-cheek passion for keshigomu. When I was little, all I knew was that they were not for erasing! As long as they were tiny, detailed, solid-colored (and cheap enough for my mom to buy me), they were plenty for my imagination to take off to unknown worlds…

And like every good boy, I was an inexplicably huge fan of dinosaurs. Just like many of you I’m sure, I had an almost terrifyingly encyclopedic knowledge of the creatures…and, of course, I salivated over any and all dino-related toys. For whatever reason, solid-colored dinosaurs–erasers or not–were super-popular in the 80’s. I didn’t have a ton, but the few I had, I loved the shit outta.

Which brings me back to these guys.

Fantastic. These figures are simply a joy. Sure, I love the fact that it’s fucking Mechagodzilla…but just the solid, unpainted colors makes them a blast to mess around with. For real, taking these pictures in my backyard was the most fun I’ve had with modern toys in a while! Totally took me back… 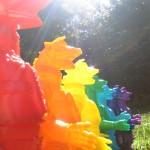 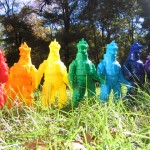 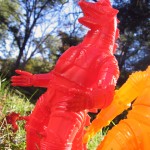 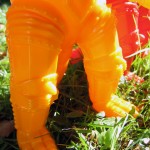 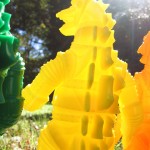 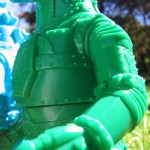 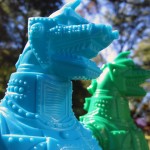 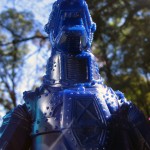 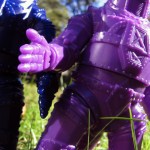 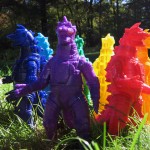 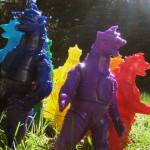 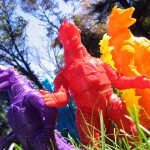 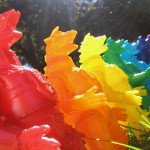 Mechagodzillas. They’re here. They’re cybernetic. Get used to it.

Comments Off on It’s all about the Pride…

Comments Off on Oldskool

Pro-taku Patrick Macias dropped by the Mancave to check out some killer sofubi. Film of the carnage is right here.

Comments Off on Hot Tears of Shame

Finally had some time to scan some Terebi Magazines. Whoo. What a workout. Kidding.. Check out these little treasures. This one’s for you Fraser! GAIKING!!!