Popy does make the coolest toys…

Comments Off on Unca Gaiking!!

Paris in the early 90ties.
Smokin weed, parties, being a student, no worldwide recession.
What a great time spending daddy’s money for Ulysses 31, Captain Future,
Goldorak, Shogun Warriors and Captain Future toys. Long time ago…
On one of these trips I bought this freaky looking robot.
Valcan I from the UFO Commander 7 series. At this time I didn’t
have a clue what series he belong to, but I thought this guy must have
some other great looking companions.

Many years later.
Nonsmoker, less parties, working all day, worldwide recession.
Still spending lots of money (not daddy’s) for vintage toys
and I know much more about this mysterious Valcan I.
Unfortunately his only companion is a robot called Brain 3.
Egg 3 would be a better name for this guy. The russian Tsar
Alexander with his love to FabergÃ©-Eggs, would loved this robot.

What a dynamic duo.
Could it be possible that Brain 3 is the brother of Gonbesu from Kyodain?
Blue Silver is the UFO of these 2 guys. Hmmm, maybe a bit to small
for two mature robots…

Last year I found a complete set of these Shinsei UFO Commander 7
toys on german ebay. The set was a dead stock and the price
was a joke, so I bought it even I’m not a fan of intergalactic
construction vehicles. Yes, missile firing construction vehicles…

The set came in the not-so-sexy blister packaging. The japanese
boxes look much nicer I must say.

Everything is made of heavy diecast. The quality of these toys is very good.
But construction vehicles…hmmm….
Don’t be afraid of the UFO Commander 7 toys because the don’t hurt you. ;-)

More fotos in the BBS.
Tell me if you like missile firing construction vehicles!

Comments Off on Shinsei: UFO Commander 7

My friend and fellow collector Trevor Tang put together this AMAZING vid of his robot and hero mask collection. Represent!!

Comments Off on Japanese Robot Masks

And so a new hybrid was born.

Comments Off on “Blue-King fighter”

Hope you have a relaxed long weekend guys!

Comments Off on Happy Easter!

OK, this is a very spontaneous Brog.
I forgot that today is “Curricular Machine day” ;-)

This mid sized Bullmark masterpiece was originally unveiled at the Dim Summit.
We were all amused, amazed and slightly disturbed by the doll/teddybear eyes.

Now bask in his hi res perfection below… 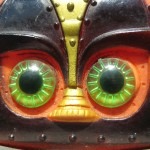 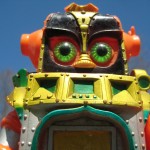 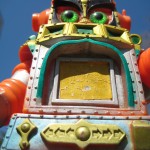 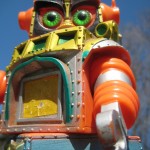 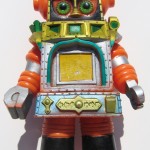 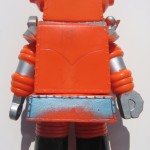 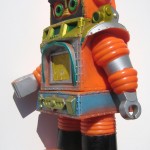 Comments Off on Which came first…
« Previous Page Site Map