All you need is a screwdriver…

No more holidays without your best friends. 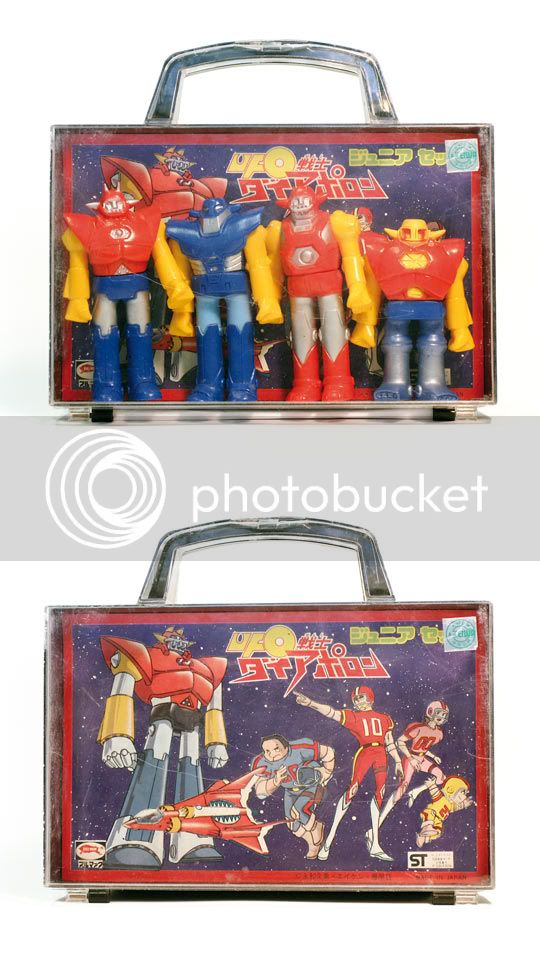 Have fun with Diapolon, Trang, Header & Legger at the beach.
Easy to transport in this handy Bullmark Travel Case ;-)

Comments Off on Diapolon Travel Case

I’ve always loved the various large carrier vehicles, airplanes, and space ships in many TV series, both animated and live-action. As a kid I always thought there were too few toys made of such carriers. Who wouldn’t have loved to have an Autobot space shuttle play set, a Battlestar Galactica, or one of those cool motherships from various animated series? Sadly, those that we did get in the Netherlands tended to be horribly underdetailed and inaccurate, often having weird proportions and being only vaguely recognisable as the original. The good ones were very expensive and from somewhat before my time.

Fast forward a few years, bring on the internet, and bring on me starting collecting toy robots. I discover a lot of those motherships and carriers actually had pretty nice toys in Japan. END_OF_DOCUMENT_TOKEN_TO_BE_REPLACED

Comments Off on Gran(d) Nasca

Comments Off on Models are sexy: T-28

Jumping ahead of Erik a bit ;) Love this bot!

Comments Off on Pegas MFV

13″ painted vinyl of the RX178 MKII Gundam from the series “Zeta Gundam” made by Bandai in 1985. This piece is more commonly found unpainted/white vinyl in a cardboard/black box. I totally wish that Bandai would have made other mecha from this series ala Johnny Ridden or Rick Dias ? Denjin, a small garage vinyl maker, did make many of these gundam baddies like Dom and Zaku, Roger can comment more on this.. Ironically, they are actually far more difficult and far more costly to find than this particular vintage piece.. Go figure.

Fujio Akatsuka’s genius manga Bakabon from 1967 is one of my favorites! As some of you guys know I buy the “unagi-inu” stuff like crazy. I think last time Hillsy and I were in Japan together I bought over 20 pieces.. Behold my current Akatuska-san shelf which also hosts a vintage vinyl of Akatsuka’s NYAROME (pink cat) and friends.

ALSO, pictured is an 8+ inch Nyarome vinyl I got in Osaka. SO DOPE!

Littler than my MFV..

Comments Off on Lil’ Pegas..

Though not officially a Japanese toy (no marks to be found!) , this licensed re-cast of the Takatoku vinyl beats out the original with the addition of “missiles launch from the breast”.

Comments Off on GiG Megaloman: Bastard Son of Ultraman & Barbie.

Bandai 1990 Super Valkyrie – a black sheep in the herd?

The last of the truly vintage 1/55 Hi-Metal Macross Valkyrie toys, the VF-1S Super Valkyrie (Roy color scheme) released by Bandai in 1990 has a bit of a reputation with Macross fans as being inferior to previous releases. The main reason for this are some relatively major mold changes. Due to this, this toy remains somewhat unloved and is probably one of the cheapest vintage Valkyries available, usually selling for not much more than the more recent Super Valkyrie re-releases on Yahoo Auctions Japan (around 10k yen).

But is this reputation justified? This I want to explore in this review. Now I must say it straightaway: I like the more controversial changes. However, there are some other minor problems that may cause your mileage to vary, and that actually tarnish the toy more than the mold changes that are often so despised.

Let’s start with the box:

END_OF_DOCUMENT_TOKEN_TO_BE_REPLACED

Comments Off on Bandai 1990 Super Valkyrie – a black sheep in the herd?
« Previous Page — Next Page » Site Map